Covers basic Bluetooth text communications with links to tutorials on sending numeric and binary data, and connecting to Arduino over App Inventor Bluetooth.

High res, suitable for printing. Feel free to share with others.

Here is a GIF image of the first page but use the PDF for printing (higher resolution) and it includes both pages:

Do you need to use a “real programming language” to create useful applications?

The history of programming begins long ago with the toggling of switches on a console to “program” a system. This primitive method advanced to the use of short text instructions called “assembly language”, which was then followed by programming languages such as Fortran and others.

Yet there remains an attitude that real software is not real unless its written in a traditional programming language (Java, for example). There is a joke, especially among hardware designers, that “real programmers program in solder”!

High res, suitable for printing. Feel free to share with others.

Here is a GIF of the cheat sheet but use the PDF for printing (higher resolution):

I have created a “cheat sheet” that captures all of the App Inventor components, blocks, events, properties and procedure calls. The “cheat sheet” is 9 page of details, in a large (almost 5 MB) PDF file that contains high resolution images suitable for high res printing. For those learning App Inventor, the cheat sheet may help you quickly find various components within the interface.

The 22 hour online course is offered through the udemy.com

(I did not make clear – sorry – this course is from Professor José Luis Núñez and he is offering it through udemy.com. I am not involved in this at all – just sharing the link – Ed)

App Inventor has introduced “copy and paste” of code blocks. Now you can copy blocks of code within a current screen, or from one screen to another screen, or even between projects. This is great news!

Look for the “backpack” icon at upper right of the blocks Viewer screen:

Select a block or blocks with the mouse pointer, and then click and drag the selected blocks into the backpack. A copy of the blocks are placed into the backpack and your original blocks also remain in the editing window.

Click on the code block in the backpack (at right) and drag it into the Blocks Viewer. That is all you need to do to copy blocks.

You can put several blocks into the backpack, and then select only the ones you wish to copy over to another blocks Viewer.

How do you empty the backpack? It seems the only way to empty the backpack of saved items is to close the editing windows, go back to the MIT App Inventor home page (http://appinventor.mit.edu/) and select the Create apps! button to re-enter the designer and blocks editor.

Regardless, this is a GREAT NEW FEATURE! Thanks MIT App Inventor team!

An array is a variable data type that stores a collection of values referenced by an index number.

For example, suppose we wished to store the names of the 12 months of the year: January, February, March, … , November, December so we can convert a month number to a text name. Month 1 converts to “January”, Month 2 converts to “February” and Month 12 converts to “December”.

An easy way to do this conversion is to set up an array that, in concept, looks something like this:

Month is the name of this variable – but unlike other variables, this one stores 12 separate values. Each value is referenced by using an index – if the index value is 2, then Month[index] refers to “February”.

If you have studied algebra math or beyond, you have encountered array variables such as X1, X2, X3, … Xn where the value Xi is read as “X subscript i”. This is the same concept as an array of values. If you have not studied algebra, this notation may be new to you.

I created a simple app to demonstrate the use and implementation of the array. You can download this app from the MIT App Inventor Gallery here.

END_OF_DOCUMENT_TOKEN_TO_BE_REPLACED

A reader asked, “When using the 2 button Notifier dialog, how do we know which button was pressed?”

The 2 button Notifier dialog alert box displays 3 buttons(!) – the first two have values you specify, such as “Ok” and “Done”, as shown here, and the third is an optional generic “Cancel” button:

The Notifier component block is a procedure call that has no return value – so how can you determine which button was selected?

The answer is that the selected button is returned to a separate event handler.

END_OF_DOCUMENT_TOKEN_TO_BE_REPLACED

Finding a specific programming block with in the AI2 Blocks editor can be hard for new AI programmers.

You found a great code example online and want to recreate it by entering the blocks in to your program – but you cannot find that red block in the middle of the code sample? Where is it? !!!

You start poking around the drop down lists, scanning up and down the pop up menus, missing it the first time(!) and then going through all the blocks again until you finally locate that darned block! Frustrating!

END_OF_DOCUMENT_TOKEN_TO_BE_REPLACED

For a complete description of Volume 1 (Introduction), Volume 2 (Advanced Concepts) and Volume 3 (Databases and Files), please see my App Inventor 2 e-books page where you can view the table of contents, download a sample chapter, and find links where you can obtain these ebooks online at Amazon, Google Play, Kobo Books and so on.

Volume 3 is now available at

Links to all 3 books are available here.

My Guide to 3D Photography e-book is available from:

THIS WEB SITE HAS MOVED!

THIS WEB SITE HAS MOVED. PLEASE VISIT OUR UPDATED WEB SITE AT OUR NEW WEB ADDRESS:

THIS PAGE IS NO LONGER BEING UPDATED. NEW CONTENT IS NOW AT LEARN2C.ORG

and select "Get Notifications".
Tumblr!
appinventor.tumblr.com

Visit appinventorplus.wordpress.com - one of the world's most popular web sites for all things MIT App Inventor - the quick and easy way to create Android apps!

Check out my books on App Inventor: Click here for sample chapters, where to buy 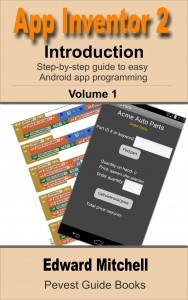